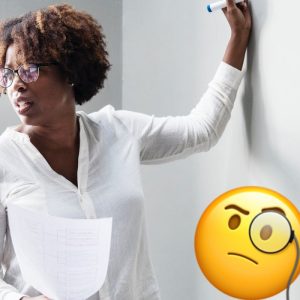 The reason I created this website in the first place was because of this: lack of financial education in school.

It made me angry and frustrated that governments simply don’t believe it’s an essential part of our education. Ever since I took notice of this huge lack of education, I’ve been thinking and writing a lot on the topic – but I’ve never had a proper sit down and thought about the why. Why have governments so royally messed up on this one? So I did a bit of research and asked a few questions – and I think I have a few answers. This is how it worked before: study hard, get good grades and get a high paying job. Once you get the job, stay with the company for 40 years and in exchange they’ll pay you a pension with benefits and rewards.

It’s all very fancy and dandy but times have indeed changed. In the past 50 years the pension system, the tax system and the legal system have evolved and changed drastically. Now, you’re responsible for your own retirement and you’re the one who has to make sure you’ll have enough money at 70. So yay, government has decided to give us a bit more of space and independence (I’d say that’s a good thing). But there’s just one issue – we have no idea how.

Schools are still teaching us the whole get good grades and a high paying job deal – but the truth is, that’s not enough anymore. Now, people are job-hopping, the economy has had a few crashes and there’s a lot of robots about. If you want benefits, a secure retirement and something stable, a job isn’t the answer. Financial education is. And schools haven’t caught up yet.

Working on from the last point, teachers are older than the students (normally). Since they’ve been taught through the old education system, they too have no idea about personal finance, and therefore don’t feel capable of teaching it themselves. As you see, it’s a vicious circle.

Governments and financial entities have to step in and offer education to the teachers before it can follow on to the students.

Teachers are also under a lot of pressure to get the students passing exams and getting good grades. This means they prioritize other subjects such as maths and chemistry, leaving personal finance forgotten next to sex ed.

Not only that, but personal finance is that: personal. If the teacher’s financial situation is a mess, they’re unlikely to know how to teach it to students.

So you see how it is – not only do the governments have to educate teachers on personal finance, but they also have to help them improve their own financial situation. This means fixing previous mistakes, encouraging self-education and self-improvement. Financial education starts with the individual, and will governments be bothered to help the individual teachers? Considering the current low pay and pension cuts, I think we have quite some way to go.

We learn a lot from our parents – habits, politeness, cooking, etc. Another big thing we learn from them: money. If parents take time to teach their children the important aspects of money and some good financial habits, the child will grow up with the essentials of financial education. But if the parents have no idea about finance… surprise surprise, neither will the kids.

This is especially true if the parents have bad financial habits: constantly in debt, making bad decisions, complaining about the lack of money. All this influences the child and will lead to future financial ignorance as well as bad money habits.

So once again, governments would have to step in and help the individual parents sort out their own finances before they could start relying on them to bring up financially aware kids.

No one knows where to start

From what it seems, no one really knows where to start. No matter how many times we shout ‘we don’t know what are taxes! Or mortgages! Or venture capitalism!’, the system will still be like ‘but what do we teach them?’.

Ok so maybe I’m being a bit mean – the British government did in fact add personal finance into the education curriculum in 2014. It’s now compulsory for schools to teach it in their maths and citizenship classes But guess what? Nothing has changed.

Why is that? Because the curriculum and teaching methods are lacking. And we shouldn’t be surprised: half of students dislike maths, reading, history, economy, etc. Simply because the education system is antiquated and we’re still teaching with boring theory books, memorisation techniques and lectures. But that’s another rant I won’t go on; the simple fact is that students aren’t being taught well in any subject, which is why personal finance isn’t any different.

Ewww.. finance? Is that some kind of disease?

Experts seem to think that the general population isn’t interested in learning the basics of money.

I have to say I disagree. I bet if you went into a classroom and shouted ‘Who wants to be rich?’ everyone would raise their hands. Once again, it’s about using effective teaching methods and making the topic interesting: activities, real life experiments, interactive games, etc.

In college, we get our first proper taste of money. More freedom, less supervision from parents, etc. Because of that, students go all out with their money: ‘let’s all see who can spend their student loan money the fastest’ (we’ve all done it). Honestly, it’s fine: college is there to experiment, to try out the weird stuff and allow the crazy to flow. If you get kicked out of your accommodation well that’s on you – better now than at 30 with a family.

Students want to go crazy with their money simply because they think budgeting is boring, saving means more restrictions and investing is only for the rich. But the thing is that financial education isn’t just about that – it’s about being aware, being in control of what happens and knowing what to do. Want to waste half your student loans on cheap alcohol? Go ahead, just make sure that you’re aware and know how to deal with all the problems that come next.

What I’m trying to say is that people are interested in managing their money and being financially stable – we’re just living in a culture that doesn’t teach us how to.

A slightly darker reason for the lack of financial education: it’s easier for others to steal your money.

Ignorance is bliss? Yes, but not when you’re money is slowly disappearing into the pockets of others. Banks, companies, media corporations, governments – they make more money when you don’t know what to do with your finances. The more debt you accumulate on a credit card the more you’ll have to pay back to the company. The more adverts out there convincing you to buy a new car the more money you’ll spend on something you should be buying second hand.

It’s scary and it’s sad, but I think we can all agree that it’s true.

It’s also the reason why people are scared of money and believe that it’s ‘evil’. All the financial jargon makes it hard to understand what really is going on. All we are taught is that we need money for food and for a roof over their heads, so we cling onto something secure, something stable: a job. And many times, it’s a job we dislike, or even worse – we tolerate. This common occurrence is called the rat race and it’s what a large part of our society is based on. A discussion for another time.

It’s not all bad news:

I may have painted a pretty negative picture of our governments and society as a whole. Although there is a lot of work to be done on financial education, I’m happy to say quite a few organisations and charities have been campaigning for financial education for years.

Here are a few of them:

CAP (Christians Against Poverty): This British charity is all about counseling people out of debt and helping them back on their feet.

Young-Money: An organisation with resources on helping children understand money. They create programmes for schools to teach personal finance to kids.

The Money Charity: Very awesome charity that works on products and services teaching finance in schools – they also talk to policymakers and try to change the laws.

There’s a lot going on in other parts of the world. I see more and more personal finance blogs in America taking on financial education and talking about curriculums and the different steps to take. There’s work to do, but at least we’re getting started.

What we can do about it

It’s true that a lot of it lies in the hands of the government and the education system. They need to work not only on implementing an efficient personal finance class in the curriculum, but they also need to focus on the individuals: the teachers and the parents. And that’s not always easy.

As a member of society, we can also help out. You don’t need to go all out and create a blog (#me), but I think one great way to increase awareness is to simply talk more about money with friends, family and strangers. Money is still a taboo topic, and asking someone how much they make is like asking them how their sex life is doing – it simply gets awkward. So let’s make it less awkward: talk to your friends about your current money problems, ask them how they’re dealing with theirs and try to find a solution together. What you’ll learn will be with you for life.

‘I immediately loved your site and though I’ve been working for the last 6 years, I wish I had followed a lot of your advice when in university. I should have worked part time to earn some extra money and invested it. I would be much further along if I had done that.’ – Jalpan from Passive Income Engineering

Financially Mint is on another break! ☕ I will

Investing in yourself now will return bucket loads


Error: API requests are being delayed for this account. New posts will not be retrieved.